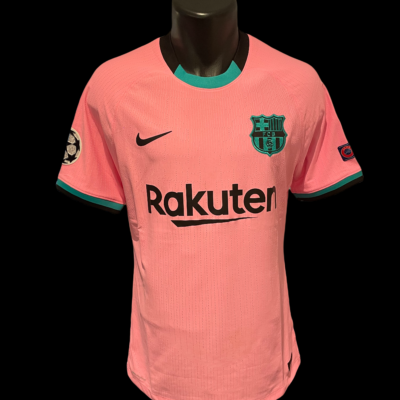 Matchworn Frenkie de Jong FC Barcelona pink away shirt from La Liga game vs Getafe. This shirt has been washed but you can see small sign of match wear and sweat marks in the neck.

Barcelona lost the game by 1-0 on a penalty scored by Getafe’s Jaime Mata. Frenkie de Jong played 80 minutes for Barcelona before he was subbed off for Danish striker Martin Braithwaite.

Frenkie de Jong joined Barcelona ahead of the 2019/20 season. Having just come off a highly successful season with Ajax, where the Dutch giants reached the semi-finals of the Champions League, where they were knocked out by Tottenham in dramatic fashion.

During his second season at the club, from which this matchworn Barcelona shirt stems, De Jong won his first trophy with Barcelona. It came in Copa del Rey, and De Jong played a big part in getting the cup to Camp Nou. He scored once and registered two assists in a 4-0 win against Athletic Bilbao.

Since then, Frenkie De Jong has been an important player for Barcelona and made over 100 league appearances for Barca.

He has also played an important role for the Dutch national team, where he has already made more than 40 appearances. He played all of the Netherlands’ games at EURO 2020 and is about to embark on his first World Cup.

This is your chance to get your hands on the shirt of one of Europe’s great young defensive midfielders with this Frenkie de Jong matchworn Barcelona shirt.