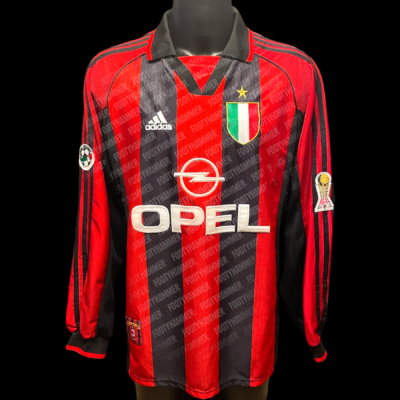 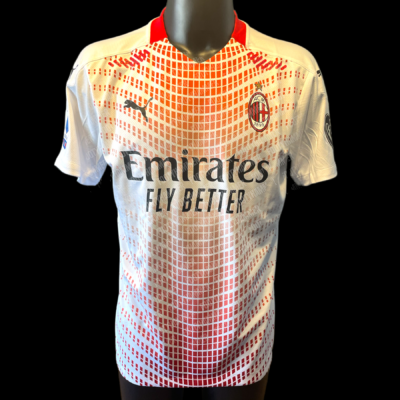 A massive Paolo Maldini #3 AC Milan Champions League semi final home shirt worn vs PSV Eindhoven on 26.04.2005, played at San Siro. AC Milan won the game 2-0 from goals scored by Andrey Shevchenko and Jon Dahl Tomasson. This shirt is a must have for any serious collectors and fans of Paolo Maldini and AC Milan.

Paolo Maldini is considered to be one of the greatest defenders of all time, and is described as “an icon and gentleman of the game”. He was known for his calm and composed manner on the pitch, as well as his ability to read the game, preferring elegance and intelligence to physicality and aggression when defending; regarded as a correct player, known for his discipline on the pitch, he only received three red cards throughout his entire career.

Maldini spent his entire career with AC Milan and holds the club record for appearances with 902 in all competitions from 1985 to 2009. The highlights during his time at AC Milan include winning the Serie A seven times, and the European Cup/Champions League five times.

Maldini’s father Cesare also played for AC Milan and went on to manage the club. Paolo Maldini has also become involved behind the scenes after his playing career. Today he serves as technical director. His youngest son Daniel Maldini is currently contracted to the club and has made multiple appearances for I Rossoneri.

In short, Maldini is a Milan legend and probably the greatest player in the club’s history. Now you can own a piece of AC Milan history with this matchworn Paolo Maldini shirt.