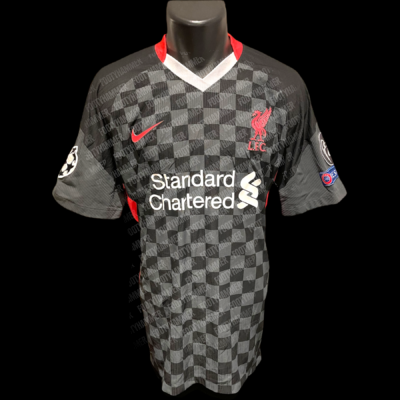 Sadio Mané was a crucial part of Jürgen Klopp’s Liverpool since his arrival in the Summer of 2016. The following six seasons the Senegalese striker managed to score 120 goals in 269 appearances in all competitions. He was Premier League top scorer for the 2018/19 season, when he along with teammate Mohamed Salah and Pierre-Emerick Aubameyang scored 22 times in the league.

Mané like most of the Liverpool team didn’t have the best season in 2020/21. He did manage 11 goals from 35 league games, but that is his lowest ratio during his time at Liverpool. He would bounce back the following year, when he during his final season scored 16 times in 34 Premier League games.

Mané will always be fondly remembered by Liverpool supporters for his contributions to the club’s most successful period in recent years. What better way to celebrate a modern Liverpool hero than with this Sadio Mané Liverpool 2020/21 shirt.