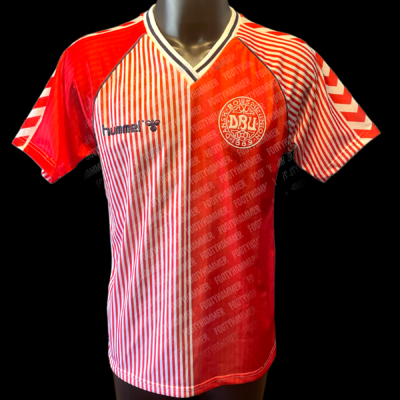 Arguably AC Milan best left back since Paolo Maldini retired! Theo Hernandez #19 AC Milan white away shirt from Serie A match vs Crotone, played on 27.02.2020. It was AC Milan second game of the season in a very good Serie A season finishing 2nd after Inter. AC Milan won the game 2-0 away from home from goals by Franck Kessie and Brahim Díaz.

The season overall was a turning point for AC Milan and their best in nine years. It was also a highly successful period for Hernández personally. He appeared 33 times in the Serie A and scored an impressive seven goals from left-back.

The following season, Theo Hernández was once again instrumental, as AC Milan clinched their first championship in 11 years. Hernández appeared 32 times in the Serie A during the season and contributed with five goals.

Theo Hernández is originally a product of Atlético Madrid’s academy – along with his brother Lucas, who currently plays for Bayern Munich. He transferred to Real Madrid ahead of the 2017/18 season, during which he appeared 23 times for Real in all competitions. The spent the following season on loan at Real Sociedad before heading to Milan for €20 mil.

Given his exploits with AC Milan, it comes as no surprise that Theo Hernández is part of the French national team. France are as always among the favourites, when the 2022 World Cup kicks off, and They Hernández will no doubt play and important part for Les Bleus.